The digitalization of societies throughout the world during past two decades has reshaped economics, logistics, and communication with such force that the mankind is undergoing the biggest change since the Industrial Revolution. Students starting their school path year 2016 will be in the job markets around 2035. The prospects for employment within the next 20 years will be different than they are in 2016. Oxford university researchers suggest that by the year 2035 nearly half of the current jobs will be replaced with computers or robots. (Fray & Osborne 2013; MIT 2013a; MIT 2013b.) Digitalization is reshaping employment markets rapidly and inevitably, and it has been said, that even the job tasks will transform from concrete and physical tasks to abstract tasks (Griffin et al. 2012; Fray & Osborne 2013). This means that manual and routine tasks will be done by machines and humans will work with more abstract and creative tasks, such as designing platforms and creating new services for customers harnessing e.g. coding and computational thinking.

Policy makers in Europe have recognized these challenges, and they are concerned about the performance of European states in the future. By the year 2020 the EU will face a lack of 800 000 ICT-professionals working with new industries, such as Internet of Things (IoT). (European Schoolnet 2015.) Initiatives have been launched, and for example coding and computational thinking are now part of the national curriculums in 18 EU member states (ibid. 2015). These changes in societies and globalized markets raise a question, how do we prepare our students in schools to face these changes and adapt to changing job markets after they graduate? What skills should students learn in their school years? This paper introduces best practices for policy makers, parents, teachers and teacher educators how we could prepare our students to future job markets by teaching our students to collaborate with and through robotics and coding.

As presented above, robotics and automation are reshaping employment markets. Robots are usually considered as part of heavy industry, but robots and automated systems are shifting from such industry towards everyday life with an accelerating pace. Vacuum cleaner robots, automated lawnmowers and logistic robots in pharmacies are just few examples, now robots are starting to be part of everyday life in households. Moreover, self-driving cars, drones delivering post packages or defibrillators for stroke patients and social humanoid robots keeping elderly persons company are at the moment just a small glimpse to the future of how robots will participate in everyday activities within the coming decades. (TechCrunch 2016; MIT 2013a; MIT 2013b.) The more robotics and automation are integrated into employments markets, the higher the possibility there is of co-working with a robot. This means that people and students need to be prepared to know what a robot is, how do they work and how human can harness the possibilities of robots to work with.

Robots can be defined as “sensor-controller-actuator systems”, where the robots interact with surrounding environment with their sensors and controllers. Robots are usually autonomous actors, making decisions based on the code that they are running. Code is designed by humans and robots just execute the commands given by humans. According to Sell & Altin (2015)  “[…] robots […] can be compared to a human being. We have senses, we smell with nose, we feel the touch with skin, we see with eyes, hear with ears and taste with tongue. Robot’s senses are called sensors. In case of robots and human beings, sensors and senses are the only way to perceive the environment. Robots have controllers, humans have brains. It is our control center - information from sensors and senses go to the controller/brain. The brain makes decisions based on received information. The result of a decision could be, for example, a movement for which we use muscles. Robot’s muscles are its actuators such as motors which complete sensor-controller-actuator system.” (Sell & Altin 2015.)

As robots observe the environment while moving and executing tasks, they make the abstract code inside them visible for humans. Humans see moving object in their living room cleaning the floor, but actually they see a complex command line compiled with sensors, motors and moving algorithms inside their robot vacuum cleaner.  For students, robots are particularly useful and engaging to see their code executed by tangible objects that move, interact and possibly crash if they have bugs[1] in their code. As most robotics kits used in schools combine assembling the robot frame (and usually it has to be designed from the very start), before students start to design the code they want their robot to execute, they have to use creativity, physics, mechanics and probably even handicrafts to build a robot that can be encoded to certain task. In short, robot is a concrete product executing command lines designed by humans, and with robots it is easier to make the code and coding visible for students.

From the point of view of teaching and learning robotics can be seen as a tool for learning 21st century skills. 21st century skills are considered as the skills needed in the future job markets and in the societies in general. These skills emphasize inter alia creative and critical thinking, problem solving, communication, collaboration and ICT-literacy (European Schoolnet 2015; Griffin et al. 2012). Prior research during past two decades demonstrates that teaching of robotics is a good way to promote problem and inquiry based learning, enforce student collaboration and creative thinking. Researcher Alimisis has stated: “the use of robotics in education is aimed to […] learning situation that will actively involve learners in experimentations, research and in authentic problem solving.” (Alimisis 2012). Robots per se are just tools to put these teaching and learning methods into action, but as they combine both learning-by-doing and collaborative actions they reinforce the 21th century skills teaching. (European Schoolnet 2015; Alimisis 2012; Galvan et al. 2006; Järvinen 1998; Martin 1996; Haapala et al. 1996.) Moreover students learn how the code they have designed determines the activity of a machine or robot. Thus, robots bring the code “alive”.

Coding has been implemented in national curriculums in 18 European Union member states (European Schoolnet 2015). By doing this this the respective nations wish to develop an improvement in computational and logical thinking, interest in technology and programming and improve students ICT competences in general. Coding and programming are compulsory inter alia in Bulgaria, Czech, Slovakia, Finland, Portugal and in part of United Kingdom. Countries that combine coding and robotics in their education are amongst others Slovakia, Czech, Spain, Estonia and Malta. This report will provide small summary about coding and robotics initiatives within Finnish, Estonian, Swedish and British school systems (fig. 1). 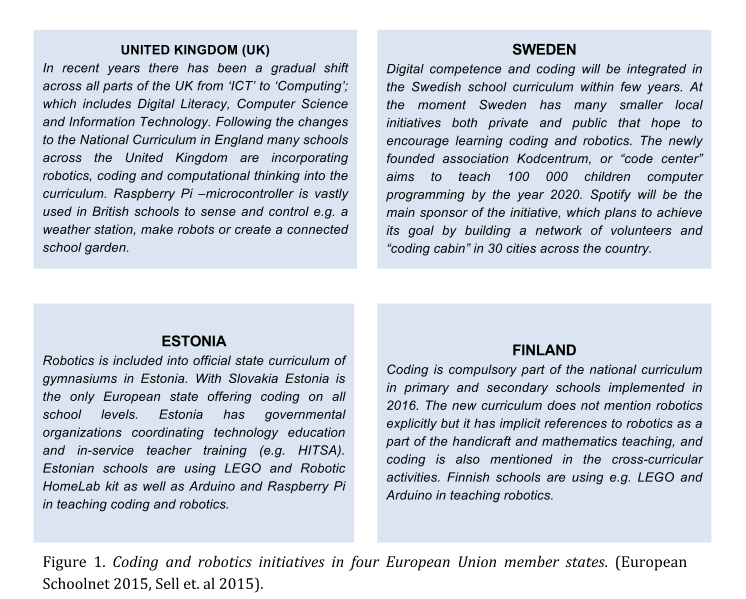 As coding is part of the national curriculums in majority of European member states, the starting of robotics teaching should be relatively easy to arrange. Most robotics kits harness both graphical and language based programming, so students and schools need only to add robotic kits in order to proceed from computer based programming to robotics teaching and learning. Figure 2 presents estimated calculation how much schools would have to invest in order to start robotics teaching from scratch. The calculation is based on the Estonian robotics experiences which retains LEGO robotic kits and Raspberry Pi –kits for advanced robotics. The composition presented below can include other robotics kits also, such as VEX-robotics, Arduino -platform or Beebots for primary school level. It should be acknowledged that Robotics for Schools ERASMUS+ -project has provided tasks and assignments for schools to be used without any technological devices, so starting robotics teaching can be done with a low-level approach (www.roboticsforschools.eu). 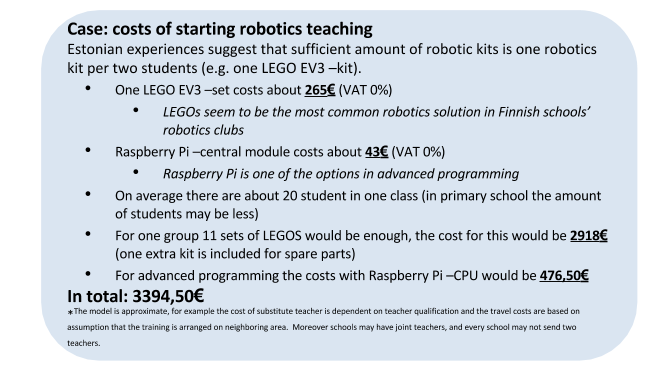 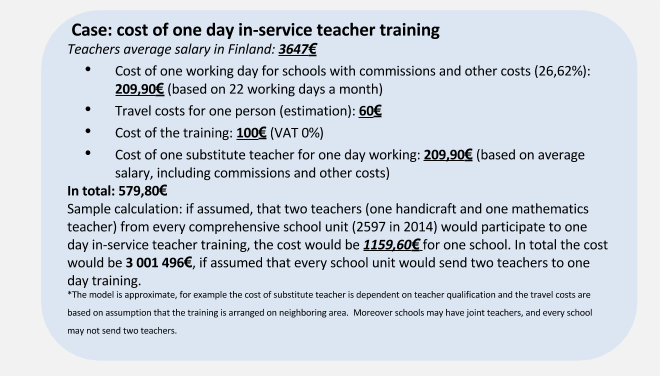 Figure 3. Costs of one day in-service teacher training in Finland

Estonia has developed a governmentally coordinated teacher training model which is presented in figure 4. The model has been developed in cooperation with universities, NGOs and private sectors. The model is explained in the “Best practices” -document (Sell et al. 2015). The model is a good framework for other countries and schools planning their robotics and coding teaching. For succeeding in robotics and coding teaching, policy makers and school actors have to be aware of these requirements so that the teaching of robotics is on solid and pedagogically sustainable foundation. Experiences show that in-service teacher training for robotics can be carried out in cooperation with universities, NGOs and private sector. Initiatives supporting coding and robotics teaching can be found from appendix (appendix 1; European Schoolnet 2015). 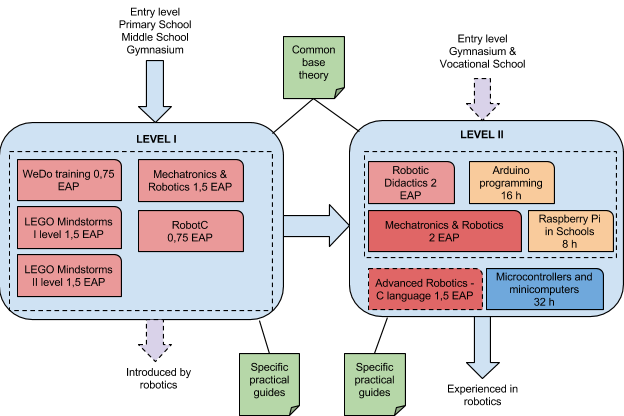 As presented above, many coding initiatives in schools have been carried out throughout Europe. The employment market is changing with a gathering pace from manual tasks to abstract tasks, and automation and collaboration with robots is the future that students starting their school in 2016 shall face.  How do we prepare our students to face these changes and adapt to changing job markets after they graduate? What skills should students learn during their school years?

Teaching robotics is a good way to promote the 21th century skills as it combines creativity, collaboration, problem solving, logical thinking and coding. Robotics brings relevance to school coding as robots are concrete objects executing the abstract code. Moreover robotics prepares students to understand mechanics and logics of robots. Sense of robotics will be important for future employment and will be important not to repeat those practices that caused gender divide in relation to technology in teaching robotics and coding. Therefore it is important to avoid stereotypes in teaching and use learner-centered environments where pupils solve real-world problems in varying everyday-life problem contexts. While Robotics for schools recognized this and has developed its teaching materials accordingly, it is important to keep this in mind outside the context of this project if we want everyone to learn about robotics and coding.

Policy makers and school representatives should acknowledge that in-service teacher training has to be properly resourced and coordinated. The Estonian model presented in this document gives good framework for planning the coding and robotics teacher training. Moreover acquisition costs need to be covered so that schools can purchase robotics kits and teach their students the basics of this matter. Local cooperation is the best way to acquire robots, for example rotating the robotic kits with schools and districts counts the purchase prices. Not all schools need to have their own robotics kits, devices and kits can be circulated with schools. In addition the national and local curriculum has to support the coding and robotics teaching. Several European countries are bringing Computer Science back to their syllabuses, but the process has to be backed up with in-service training and proper analysis of the various coding and robotics initiatives through Europe. Robotics for Schools ERASMUS+ -project has produced ready to use materials and tasks for schools and parents to ease the start of robotics teaching. Starting with robotics is easy; on primary level most of the tasks can be executed without robots (e.g. humans acting as robots). What all students and teachers need at the very start is determination, ready to use materials, creativity and support in teacher training. All the rest is just about logical thinking and bringing the code “alive”.

Frey, C. B., & Osborne, M. A. (2013): The future of employment: how susceptible are jobs to computerisation. University of Oxford, 7, 2013. URL: http://www.oxfordmartin.ox.ac.uk/downloads/academic/The_Future_of_Employment.pdf